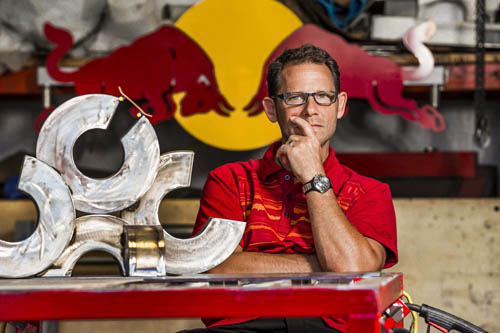 C.J. Rench is professional sculptor specializing in large-scale abstract designs and fabricating unique works of art, which reflect the values and artistic vision of his customers. Rench started as a self taught industrial engineer and senior project designer in the sporting goods industry, where he was awarded multiple patents for his innovative concepts and designs. He began designing and fabricating metal sculpture full-time in 2004, and since then has installed over 30 large-scale public works throughout the US.

Specializing in metal sculpture, all of the colorful pieces are hand painted with industrial marine epoxy and fabricated from mild steel, stainless steel or aluminum for durability and timeless quality. Incorporating glass, lighting and other design elements that create unique works for clients is a challenging and rewarding part of his work. Most of all, he wants his sculptures to invite, inspire,
and connect people, regardless of age.

CJ’s artwork spans from public to private and corporate collections throughout the globe. His unique designs have given him the opportunity to work for numerous national firms including Universal Studios, Resers Fine Foods, and Red Bull. Always on the leading edge, C.J. is currently working with Red Bull to create the world’s first public art installation designed and built specifically to be skateboarded. Titled “Skatespace”, the project is a brand-new concept aimed at reshaping the way we view and interact with public art. All works are fabricated at his studio in Hood River, Oregon where he lives with his wife and daughter.

“I use bold colors in my works, after all life is colorful, joyful and exhilarating why shouldn’t your art be?”